Home Famous Paintings Most Famous Cow Paintings in the Market When we speak of paintings, the first few things that come to the mind of a person concern either scenarios, beautiful birds and animals, a flock of cattle, the beautiful mountains and rivers or the stunning sky and earth; but the idea of glorifying the cow particularly in it might come as a surprise to few; but let us tell you that a few centuries back, cow paintings were not only considered to be a striking subject but also had numerous other annotations. Earlier, in Britain, the cow paintings stood as a means for the elite class to boast about their prosperity; especially the fat cows. The anatomy of these cows was quite distinct from what we usually come across; they had a huge fat body, while their legs were the exact opposite. The significance of these cows lied in the size of their bodies, bigger their dimensions, wealthier is the owner and this thereby stood as a successful depiction of class. Since then, cows have been used as the primary object in the paintings by various artists with their every unique interpretation of their significance, wealth and strength. Here are a few examples of the famous cow paintings in the market.

The ‘Yellow Cow’ is a painting created by the maestro Franz Marc and dates back to the initial years of the twentieth century. The use of this one specific color of yellow to trace the most integral part of the painting holds a lot of significance; firstly he wanted to transcend the metaphysical thresholds with the color which was similar to the one done by Vasily Kandinsky, and secondly, the yellow cow stands for the feminine qualities which are assumed to have been dedicated to his wife Maria Franck. Some have interpreted this depiction to be a channel to let out his personal qualities and his view of his marriage thus limiting its scope to the private realms. Cattle and sheep in a stormy landscape

Yet another masterpiece of cow paintings, the ‘Cattle, and Sheep in a stormy landscape’ was painted by Paulus Potter that had stormy and catastrophic sky waiting to pour on the land as its setting. In the picture, you will find a bull, two cows and a pair of sheep as the only inhabitants of the land; a strong sharp wind has sent alert to every human being and the trees are bending down due to its force. It is only the cows and sheeps feeding in sheer calmness and the protective bull looking over his companions. The cattle animals and particularly the cow has been venerated in this painting because of the inevitable dependence of the common man on dairy products during the period when the Dutch Republic was about to be granted with independence. 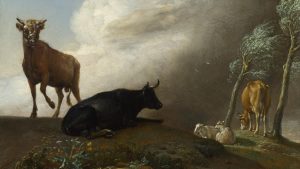 Produced by Mark Tansey in 1981, in this painting, the cow is seen staring at a painting of a cow held up by several men. The men are looking at her with a hope that she will recognize her look-alike and deliver a reaction. The question is, will she be able to distinguish reality from fiction? This is a brilliant example of art where the traditional symbol has been placed in the modern context with the hope that there will be reconciliation at some point. 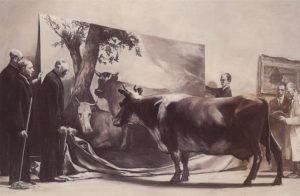 Apart from these vintage paintings that have upheld the potion of history and contemporary mixed in equal parts, there are also numerous other paintings that hold a lot of value in the present market and includes pieces like ‘Lying Cow’ by Vincent Van Gogh, ‘Twilight at Leads’ by Winslow Homer, ‘The World Cow‘ by Franz Marc and ‘Cows and Sheep at a Stream’ by Karel Dujardin.

You may also be interested in: Famous Cowboy Paintings Tell Unique Stories