Michelangelo was one of the most important artists of the Renaissance. His paintings are famous for their beauty and intricate details. Throughout his lifetime, he produced over 4,000 works.

Below is a list of 10 most famous Michelangelo Artworks:

The Creation of Adam

Michelangelo’s The Creation of the world is a fresco in the Sistine Chapel, measuring 280cm by 570cm (nine feet two inches by eighteen feet eight inches). In the composition, God appears in the form of an aged white bearded man with long slender arms, reaching out to Adam and imparting life to him. Adam is naked on the left side of the composition, with his arms outstretched, mirroring God. This portrayal of the creation of man is a reminder that man is created in the image of God.

Michelangelo took inspiration for his creation of Adam from the Bible. Genesis 1:27 tells us that God created man in His image. In addition to Genesis, the artist was influenced by the medieval hymn “Veni Creator Spiritus.” The hymn mentions the finger on the paternal hand of God, which Michelangelo took to mean the “divine breath of life” that created Adam.

Although David is considered the epitome of classical perfection, recent research has discovered an inconsistency. The statue’s eyes seem to point in different directions. The right eye looks off into the distance, while the left eye remains fixed forward. The flaw went unnoticed for hundreds of years.

The statue depicts the Biblical story of David’s victory over the giant Goliath. According to the Bible, David defeated the giant Goliath with his sling and a handful of stones. In Michelangelo’s David, the biblical story is the source of inspiration for the sculpture. It is a stunning example of male perfection and stands 17 feet tall. 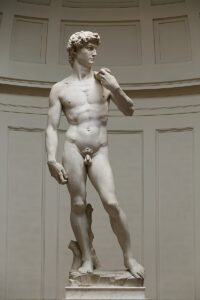 A trip to the St. Peter’s Basilica will surely leave you breathless. Its design and interior is filled with masterpieces of Baroque and Renaissance art.

Michelangelo’s design for the Basilica was based on the designs of previous architects and his own vision. The result is a complex structure that blends Bramante’s original design and later plans. The most prominent feature of Michelangelo’s design was the monumental dome on the eastern end. This dome is the tallest dome in the world and is one of the most recognizable features of the Basilica. But, it is not entirely his work – only the base of the dome was completed during his lifetime. Michelangelo’s Pietà is one of the most important Renaissance sculptures. Today, it is located in the St. Peter’s Basilica in Vatican City.

The Pieta was commissioned in August 1498 and was meant to be delivered within a year. Its original location was in the French church of Saint Petronilla, but it was moved to its final place in the mid-18th century. It is currently protected by bulletproof glass.

The Pieta is an extremely moving piece of art. It is not only an amazing piece of art, but it is also an important symbol. While the rest of Michelangelo’s work may appear bizarre or un-representative of his time and place, this sculpture is both powerful and spiritual. It represents the love and unity of man with God. Michelangelo’s The Last Jutgment is a fresco that covers the entire altar wall of the Sistine Chapel in the Vatican City.

The Last Judgment features several mythological figures, including Saint Bartholomew, who held a flayed skin as a symbol of martyrdom. The artist was deeply affected by the criticism he received for his work and decided to add his own portrait.

Michelangelo’s Last Judgment has received many praises and criticisms throughout its history. Critics have pointed out its use of anatomy and the clustering of figures, but it is still widely regarded as a masterpiece. It is also believed that Michelangelo aimed to convey his spiritual life rather than depicting the physical world. The Laurentian Library, designed by Michelangelo in 1548 for the Medici family and Pope Clemente VII of Italy, houses over 11,000 manuscripts and early printed books. The library is laid out by subject and features shelves built into lecterns and a sloping platform for readers to stand and read.

Visitors can explore Michelangelo’s library and admire the staircase he designed. The staircase was built in 1559 using a clay model designed by Michelangelo. It features three flights of stairs, each consisting of a smooth grey sandstone. The centre flight is convex and has three elliptical steps on its base. The outer steps are rectangular and increase in height as you descend. 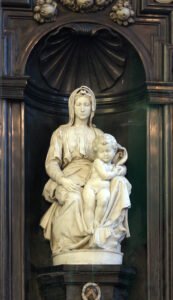 The Moses sculpture is one of Michelangelo’s most famous works. This work depicts the biblical figure in a majestic pose, with his face filled with emotion and accentuated by his beard. In addition to being massive, Moses is also endowed with exceptionally strong relief muscles, which make him seem almost threatening. In his right hand, Moses is holding the ten commandments and the tables of the Covenant.

Michelangelo’s sculpture of Moses is twice life-size, making it a truly unique Renaissance masterpiece. The artist’s own writings about Moses allude to the colossal nature of the piece. In fact, the artist wrote on 16 June 1515 about the urgency of completing the work. Nonetheless, the Moses statue was not completed for another thirty years. It was eventually installed in the church between 1542 and 1545, becoming the centerpiece of a monument to Pope Julius II. 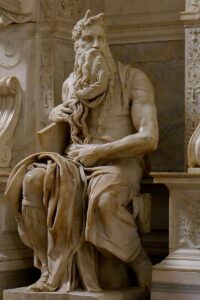 One of Michelangelo’s most famous sculptures is Bacchus. It stands at 203 cm in height and is made of white marble. It is displayed at the Bargello National Museum in Florence. The artist was just 22 years old when he created this masterpiece.

The statue portrays the god of wine and human vices Bacchus. It has a larger-than-life figure that is in motion. The sculptor who created the sculpture was a visionary and he changed Western art history forever. In the process, he created a masterpiece that is still in demand today. 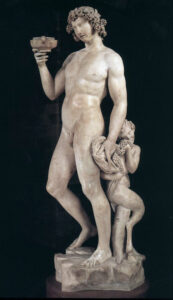 While the Holy Family is usually the subject of most art studies, Michelangelo’s Doni Tondo features five nude men. Hayum noted that while different interpretations have been made of the five men in the background, no one could agree on their exact meaning. But some scholars believe they represent angels without wings or penitents awaiting baptism. Several scholars have suggested that the five nude men represent an Old Testament figure or an ancient pagan myth.