Edvard Munch is one of the most renowned artists of the late 19th and early 20th centuries. His art is characterized by its intense and expressive use of color and form. Munch was a prolific artist, who produced a large body of work that includes paintings, drawings, and prints.

If you are a Munch fan, you may be interested in reading about some of the famous paintings he created.

“The Scream” is an image that evokes a sense of agony. The painting was inspired by a Peruvian mummy, which was exhibited at the 1889 Paris World’s Fair. Although the painting may be influenced by this work, Munch aims to transcend specific sources and give the public an image of a universal human experience.

Although the work is famous for its powerful subject matter, The Scream is an unusually simple piece. It consists of three main areas: the landscape, the sky, and the human figures. The human figures and landscape are separated by a bridge, which gives the piece a striking contrast to the surrounding scenery.

The reddish sky in the painting is thought to be a product of the Krakatoa volcanic eruption. In 1883, the eruption of the volcano on the island of Krakatoa changed the sky color in the Western Hemisphere. Munch was able to paint the red sky because of his desire to express himself, rather than convey a literal representation of what he saw. The skies in this painting are similar to nacreous clouds that occur in Norway, and the author of the painting speculates that the crater may have been the cause of the scream. Edvard Munch painted the famous Love and Pain, also known as Vampire, in 1895. The painting features a man and a woman in an embrace, with the woman kissing and biting the man’s neck. Munch painted six different versions of the subject between 1893 and 1895.

The Vampire was a sensation at the time of its creation, and its symbolic impact on Munch’s generation of artists was extraordinary. The Vampire became a symbol of sex and seduction, and continued to be revered in modern art. Although the Vampire was not originally depicted in history, it has been linked to many different themes, including the sexuality and power dynamics in the 1890s art world. Angst 1894 is an amorous work – both in period and content – with an undercurrent of gloom and concealment. The angst of the Norwegian people was a major subject for Munch, and he would use this theme in many subsequent works. As a result, the Norwegian angst has become an important term to describe Munch’s work and the contribution of the Nordic aesthetic to art.

This painting is a striking example of Munch’s skill in creating eerie moods. It depicts the world of an anxious person, surrounded by a group of people suffering from a panic attack. The painting has a distinctive division in the middle, a diagonal line. It also has a fiery red sky. Puberty is one of Edvard Munch’s most famous paintings, painted in the 1890s. It depicts a young girl entering puberty, nude and shy. This painting is one of Munch’s most controversial and evocative images. Many believe that it represents a live model, and others claim that it is a representation of the artist’s own sexual repression. Edvard Munch’s Madonna is one of a series of works on canvas by the Norwegian Expressionist painter. Completed between 1892 and 1895, this work portrays a bare-breasted woman in a provocative pose, eyes closed. The figure is suggestive of ecstatic sexuality and surrender, and is a perfect example of the artist’s early work in this vein. 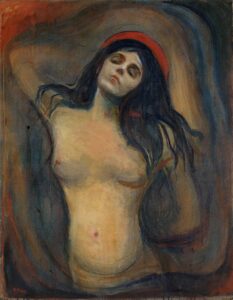 The Kiss is a symbolist masterpiece by a Norwegian artist. The subject is a man and a woman who have just shared a passionate kiss. The painting has become one of the most famous and popular works by an artist from Norway.

According to The Kiss’s attribution to Edvard Munch, the painting was done in a tentative manner in 1888-89. In fact, Munch painted several variations of the painting before settling on the final version. The artist wanted to convey the tension between the vibrant life outside and the frozen moment in the interior. There are several positions of the couple in The Kiss.

The painting is a beautiful representation of love, revealing the power of two lovers in love. Although Munch had little formal art training, he soon developed a talent for drawing. He joined the Kristiania Boheme group, a group of artists and writers in Oslo. One of the older painters in the circle, Christian Krohg, provided Munch with some valuable instruction. 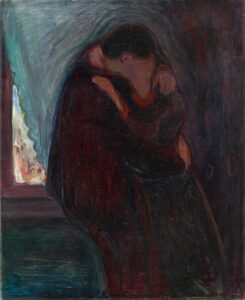 The Girls On the Bridge is a striking example of expressionist painting. The work depicts a group of girls standing on the bridge of an Oslo fjord. Today, the bridge is the same as it was during Munch’s time, and the road to it leads past the same houses and age-old linden trees.

While there are several interpretations of the famous painting, one of them is that it represents the Virgin Mary. Although Munch is not known for religious artwork, he often referred to Mary in his work. While this affinity between the two could be an intentional one, it could also reflect the artist’s devotion to Dagny Juel-Przybyszewska, the main figure of the painting. The Lonely Ones by Edvard Munch is a painting that depicts two people in an isolated environment, both staring out at a blue body. The blue body could be the sea or the sky. The physicality of the landscape is not as important as the emotions that are conveyed by the image. The black ground is scratched with white specks, possibly to suggest light falling on rocks or bones.

This painting was the most famous piece by Munch and has been referenced in pop culture for over a century. It has appeared in movies and Halloween masks. It has also been subject to high-profile art thefts. This is a great example of the impact Munch had on the world. ‘The Sick Child by Edvard Munch was influenced by the artist’s own mother Johanne Sofie’s death from tuberculosis. This work is an expressionist masterpiece, which distorts the figures to convey mood. Munch used harsh brushstrokes and a palette of dreary colors, and he spent months working on this painting. His methods, including scraping the canvas and over-painting, added to the overall mood of the work. While painting The Sick Child, Munch experimented with a variety of styles, including Impressionism and Post-Impressionism. He also traveled to Berlin, where he befriended intellectuals and artists. He exhibited his work often, but it was often met with hostile reactions. His masterpiece, The Sick Child, 1925, was considered a breakthrough for his style and content, even though it depicted the death of his sister.

“Ashes” is an 1894 oil painting by Edvard Munch. It depicts a woman in a white dress facing the viewer. The man seated next to her is holding his head in his hands in apparent sadness. The painting embodies the feelings Munch felt when his relationship ended. It also portrays Munch’s mental illness.

The painting shows three siblings, Laura, the youngest, sitting despondently mirroring her elder sister. The father is gazing forward, joining his hands in meditation. The other sibling is staring directly out of the painting. The painting has a simple but intense setting, with turquoise partitions and individuals dressed in greyish blue clothes. The colors of the figures are subdued, and the males’ faces are emphasized by the presence of the females. If you are interested in getting museum quality reproductions of these famous Munch paintings, you can order them from Outpost Art. They are the best in custom art reproductions.