René Magritte was one of the most influential surrealists of the 20th century, and his paintings have been admired and studied by generations of art lovers. His works often contained unexpected juxtapositions, dreamlike elements, and a sense of mystery. Magritte’s art is renowned for its ability to challenge our perception and explore our unconscious minds.

Magritte’s works are often characterized by their use of bold colors, symmetrical composition, and symbolic imagery. His paintings often feature everyday objects like bowler hats or apples in strange contexts – as if they were taken out of a dream or out-of-context from reality. These objects become symbols for something more abstract or elusive; they are used to explore ideas about identity, memory, imagination, and perception. One example is Magritte’s painting The  Of Images (1929), which features a pipe with the words “Ceci n’est pas une pipe” (this is not a pipe) written underneath it. This painting confronts us with an apparent paradox – if this isn’t a pipe then what is it? Magritte was challenging viewers to think about the difference between reality and representation – between what we see and what we think we see. Another iconic work by Magritte is The Son Of Man (1964). This painting shows a man wearing a bowler hat standing in front of an open window with the sea in the background. The man’s face is obscured by an apple floating in front of him – almost as if he were hiding behind it – preventing us from seeing his identity or recognizing him as someone specific. We can only guess at what he might be thinking or feeling; he could be contemplating his place in society or searching for meaning in life; all these questions remain unanswered, inviting us to ponder them ourselves. 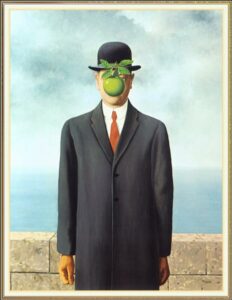 Magritte used his art to explore topics that were normally considered taboo at the time such as sexuality and death; one example being The Lovers (1928) which shows two figures wearing cloth masks embracing each other against an eerie red backdrop that hints at passion but also dread at the same time. By depicting two people whose identities are hidden behind masks Magritte was exploring how our identities can be shaped by social conventions while also hinting at how fragile those conventions can be when confronted with powerful emotions like love or death.

The surrealistic art of René Magritte has captivated audiences throughout history because it invites viewers to explore their own thoughts and feelings through unexpected images and symbols that challenge our perception on reality. Through bold colors, symbolic imagery and dreamlike juxtapositions he created unique works that still fascinate audiences today – inspiring us to ask questions about ourselves and discover new ways of looking at the world around us