Vermeer is a Dutch painter from the Baroque period. He specialized in interior scenes of middle-class domestic life. Although he was relatively unsuccessful, his genre paintings were popular in the provincial towns of Delft and The Hague. He was a modestly successful artist who was also recognized by the art world.

Girl with a Pearl Earring

One of Vermeer’s most famous paintings is The Girl with a Pearl Earring. The painting depicts a young girl with a pearl earring. Her eyes are turned wide, and her lips are parted. She wears a brownish top.

The artist originally positioned the sitter in front of a dark green curtain and gray void. However, a later revision changed the composition, repositioning the girl’s ear and the top of her headscarf. The change also altered the positioning of the headdress and the girl’s neck.

The picture has inspired many writers. Poet Yann Lovelock wrote several poems and critics such as Marilyn Chandler McEntyre have written about it. In addition, W. S. Di Piero envisioned how the painting would look in present-day San Francisco. Similarly, Marta Morazzoni compiled a collection of short stories based on the painting. The stories take place during the Baroque period and highlight the apathetic attitude towards real women.

Since the painting was first exhibited, it has traveled to Japan, Italy, the United States, and several other places. It was a major draw for audiences at each location. It has since returned to its original home in the Netherlands. 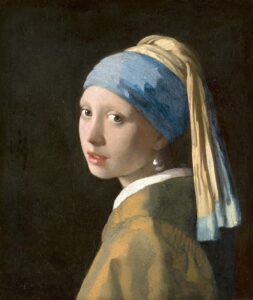 The Art of Painting

Vermeer’s The Art of Painting is one of his most intellectually ambitious works. It depicts Clio, the muse of history, sitting at an easel while she models for the artist. The painting is a study in contrasting naturalism and artifice.

The painting’s technique was based on microscopic observations. Vermeer’s paints were rare and expensive and came in limited ranges. In addition, they did not come in tubes or jars, so artists had to make them themselves. As a result, the quality of Vermeer’s paintings was further accentuated by the expensive paints he used.

The painting was meticulously modelled before the final brushstrokes. Its modelled skin was rendered with a remarkable vagueness, while its eyelashes were rendered with greater precision. Vermeer worked on each area separately and in multiple stages. Johannes Vermeer painted a young female pupil receiving a music lesson from a man. In the painting, the man’s mouth is slightly agape as he sings along with the young girl as she plays the musical instrument. The painting is one of the artist’s most popular works.

Vermeer used the music lesson as a way to demonstrate his idealism. He portrayed women as the heart of society, as well as depicting the beauty and righteous qualities of women. He also inserted other instruments to reinforce the musical theme. Vermeer emphasized the importance of music in his work.

Vermeer’s music lesson draws on resources of the time. The general scheme of the composition recalls Haarlem’s genre painters, who often painted parties centered around virginals and musical instruments. His Leiden contemporaries included Ter Borch, who invents the enigmatic woman with her back turned to the spectator. This characteristic form was later copied by Vermeer and his contemporaries. Diana and her Nymphs

Diana and Her Companions is a 16th century painting by Johannes Vermeer. Completed in the early 1650s, it is now housed in the Mauritshuis museum in The Hague. It depicts the feisty Greek goddess in a playful and whimsical mood.

Diana, also known as Artemis in Ancient Greece, is a goddess of hunting and the moon. The painting shows her in an open landscape with her devoted nymphs at her side. She punishes a huntsman named Actaeon for looking at her, and he is killed by his own dogs. Another nymph sits in the background with her back partially visible. Another nymph is holding her left foot with her right hand. The Little Street is one of Vermeer’s most famous paintings. It is a wonderful example of how Vermeer incorporated a variety of details into a single canvas. This is made possible by his technique of layering. He starts with an underpaint layer that changes the white tone of the canvas. From there, the main objects are formed by dark to light patches that are knit together to make sharp details. In View of Delft, Johannes Vermeer uses chiaroscuro to depict the reality of a scene. Vermeer also uses a camera obscura, a device that allows the artist to view his subjects without having to look directly at them. This helps create a more realistic scene. Vermeer’s use of perspective and color also gives his paintings a unique quality. 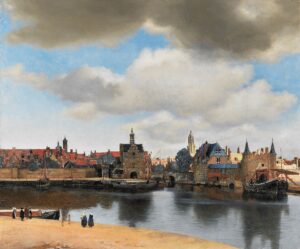 Woman with a Water Jug

Woman with a Water Jug, one of the most famous Johannes Vermeer works, shows a young woman washing her hands while sitting in a corner of her room. She has an open window to her right and is holding a silver and brass water jug and pitcher. She is also holding a linen covering for her head and dress. The painting embodies Vermeer’s interest in domestic themes, and offers a voyeuristic look at the private life of a woman.

This painting is known for its details and the attention to detail that the artist gave it. This portrait shows the domestic world in a very idealized light. Vermeer also explored light effects and texture. This is the main reason why Woman with a Water Jug is one of the most famous Johannes Vermeer paintings. The Wine Glass depicts a woman drinking wine with a man sitting next to her. The woman is wearing a peach gown and a delicate glass. Both are holding glasses of wine and enjoying the drink. A horse also appears in the painting.

Vermeer was 27 years old when he painted this picture, and it is considered one of his most mature works. It is also one of the few paintings that is signed by Vermeer. In fact, only three of his paintings were signed by the artist, which makes The Wine Glass one of the most famous Johannes Vermeer works. “The Astronomer” was completed around 1688 and is considered to be one of the great masterworks of seventeenth-century Dutch painting. The Astronomer is a work of art which is not only recognizable as an individual work of art, but also as a symbol of scientific discovery. Despite being a Dutch painter, Vermeer’s work received some recognition in his home town of Delft during his lifetime.

In a recent study, astronomer Donald Olson and his team of researchers used Google Earth to study the painting’s composition and lighting. They also calculated distances and angles of highlights and shadows in the painting. The team then visited Delft and measured the position of the sun, based on the distance between the painting and the sky. They were able to determine that Vermeer had painted the tower of the Nieuwe Kerk in a shadow. 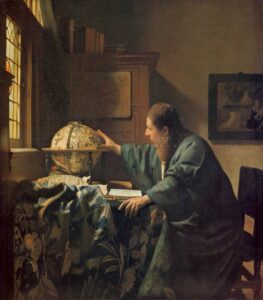 Girl with a Red Hat

Despite its odd title, Girl with a Red Hat has a lot of historical significance. It is among the most famous paintings by Johannes Vermeer. This painting depicts a young girl wearing a red hat and a pearl earring. Originally a bust-length portrait of a man in a broad-brimmed hat, it was later reinterpreted by the artist as a female. Although Vermeer was not known as a portraitist, he had a particular fondness for women and this painting is a good example of this. 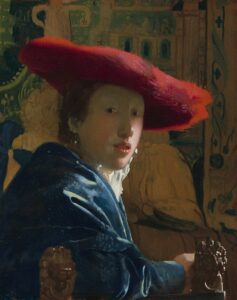 “The Procuress” is a classic genre painting by Johannes Vermeer. It depicts a young woman undergoing mercenary love. The young woman is ensconced in a red jacket, and a soldier is fondling her breast and dropping a coin into her hand. The woman, meanwhile, is a procuress, a woman who procures a man’s love for money. Despite the violence that accompanies the scene, the character in the painting is a musician and carries a cittern.

Although this painting is not among Vermeer’s most famous works, it displays several of his hallmark motifs and details. It is a perfect example of both technique and composition. However, it remains a highly disputed work. Only one authority, namely the artist himself, supports the painting’s authenticity. Most laymen, however, remain perplexed by the subject matter, dimensions, and broad execution of the painting. The Milkmaid by Vermeer

The Milkmaid by Vermeer was painted between 1657 and 1658 and marks a turning point in the artist’s career. This painting marks the artist’s mastery of light and detail, and it’s now on display at the Rijksmuseum in Amsterdam. The painting depicts a young maid carrying a milk jug and surrounded by a pyramid of milk and bread.

Vermeer’s Milkmaid is a painting that challenges the stereotype of female servants. His paintings are characterized by an earthiness that is characteristic of his work. His perspective is also known for creating scenes that are realistic without being objectified. Although his painting features a maid, she remains a woman, so it is possible that her presence is purely symbolic. 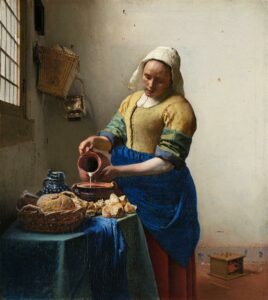 If you are interested in getting a museum quality reproduction of Vermeer’s paintings, you can check out Outpost Art. They are one of the best art reproduction companies.