If you are looking for a painting by Eugene Delacroix, look no further. Here we have compiled a list of some of his most popular works. Some of these works include Liberty Guiding the People, The Barque of Dante, and The Death of Sardanapalus.

Eugene Delacroix painted Liberty Guiding the People in 1830 to commemorate the July Revolution, the movement that overthrew King Charles X. This image exemplifies the triumph of the people over the rulers. It is an important historical piece that still inspires admiration today.

This painting features the symbols of the French Republic. It was originally titled “Scenes from the Barricades” and first displayed at the Paris Salon in 1831. In 1863, it was moved to the Luxembourg Museum and then the Louvre Museum in Paris. In 1874, the Louvre Museum acquired Liberty Guiding the People and named it after the artist. It is now displayed in Gallery 77 of the museum’s Denon wing. The Barque of Dante

The Barque of Dante, also known as Dante and Virgil in Hell, is one of Delacroix’s most important paintings. It marks a transition from Neo-Classicism to Romanticism in narrative painting. It depicts the journey of the two poets from Italy to Hell.

The Barque of Dante received mixed reviews. Although it was praised by art critics, it was not received with widespread admiration when it was first completed. Critics noted that the picture was not visually perfect. It was later transferred to the Louvre, where it now resides. Despite the mixed reaction it received, it remains one of the most important works of French art. 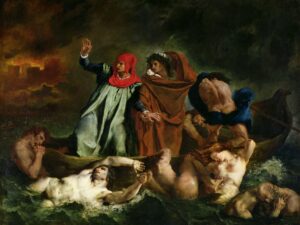 Greece on the Ruins of Missolonghi

Greece on the Ruins of Misso longhi was created in 1826 and is preserved at the Musée des Beaux-Arts de Bordeaux. T

The painting was created after the Third Siege of Missolonghi by Ottoman forces in 1826. The people of the town were trying to break out, but the Ottoman forces destroyed the town and captured its inhabitants. The residents made a mass breakout to escape famine and starvation, but it ended in disaster.

Greece on the Ruins of Missoonghi represents the Greeks’ struggle to gain independence from the Ottomans. Delacroix gave the painting a religious reference, using the Pieta and the Madonna of Mercy to represent the Virgin Mary. These religious references appealed to French people, who had sympathy for the Greek cause. 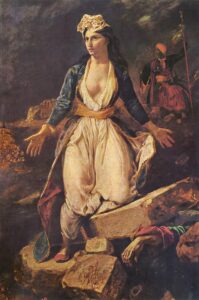 The Death of Sardanapalus

This oil painting on canvas by Eugene Delacroix, titled “The Death of Sardanapalus,” dates from 1827. It is on view at the Musée du Louvre in Paris. A smaller replica of this work is also on view at the Philadelphia Museum of Art.

Delacroix’s treatment of the subject matter of The Death of Sardanapalus is particularly evocative. His use of color, light, and form was in contrast to the more common European style of painting. Instead of displaying balance and order, Delacroix opted for vignettes, which emphasized sharp focus in the center with less defined edges. Combat Of The Giaour And The Pasha

Three works by Eugene Delacroix depict a scene from Lord Byron’s 1813 poem The Giaour. In the painting, Giaour kills Hassan. This painting is one of Delacroix’s most famous works.

Delacroix’s depiction of the battle between Giaour and Pasha is an enduring and beautiful work of art. It depicts the final duel between two men, one a non-believer and the other a Muslim. This epic battle is a favorite of the French Impressionists. Orphan Girl At The Cemetery

“Orphan Girl at the Cemetery” depicts an orphan girl walking to the cemetery. The scene is a sad one, and the artist has captured it well in his work.

This painting features a melancholic atmosphere created by the pale sky and the dark graveyard. The young girl’s posture conveys a sense of resignation and hopelessness, and she displays an exceptional technique of shadowing. The painting’s palette is exceptional, evoking a sense of sorrow and hopelessness from the purity of colour. 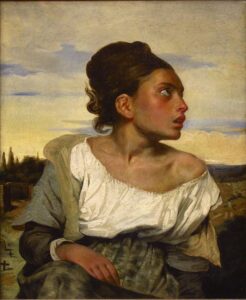 The Expulsion of Heliodorus

This painting by Eugene Delacroix illustrates a biblical episode from the Second Book of Maccabees. The Emperor Seleucus IV Philopator had ordered Heliodorus to be expelled from the temple. A horseman was sent by God to drive Heliodorus out. A Young Tiger Playing With Its Mother

A Young Tiger Playing With Its Mother depicts two enormous tigers enjoying themselves. It was painted in the early part of Delacroix’s career, when he was particularly interested in the subject matter of animals.

Delacroix’s paintings often feature tigers, including these. Although Delacroix was an impressionist, he drew on his personal experience to achieve the style that he achieved. The tigers in his paintings are both fierce and tender. This painting shows the tenderness and ferocity of tiger cubs.

The Prisoner Of Chillon

Eugène Delacroix painted the Prisoner of Chillon in 1834 in response to a poem by Byron. It describes the imprisonment of Francois Bonivard in the castle of Chillon from 1532 to 1536. 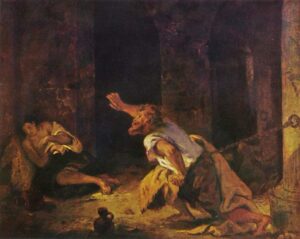 If you are interested in getting museum quality oil painting reproductions of Eugene Delacroix Paintings, you can check out Outpost Art. They are the best in art reproductions.