Mermaids are the creatures of mystic. The mythological world has always been buzzing with the creatures that mix traits of the familiar and of the fantastic, and mermaids do amalgamate the beauty of human genes with aquatic scales. They bring an aura of mysticism into mundane human world as anthropologically these marine beasts have upper half as human and lower body of a fish, with a fin. With their borderline structure of familiarity they also bring motley of innocence and fierceness. Mermaids are common in Polynesian, Celtic, Greek and Japanese mythology.

In the folklores, mermaids have existed for thousands of years from Babylonian era of deity. In the physical sense, they represent an unknown beauty, a creation beyond normalcy, shrouded in the feminine sweet voices and soft locks of sensuality but mythologically they represent the danger of destruction. Dangers not just of unfamiliarity but as in bad luck, in the legends mermaids are painted monstrous under the shrouds of innocence. They entices the sailors with their seductive voice to shipwrecks or suicide after tiring and harassing them whole night. And, like their mysterious movements, mermaids have swum into popular cultures through art, literature and legends.

Table of Contents show
1 Most famous mermaid paintings and artists
1.1 A Mermaid by John William Waterhouse
1.2 Ulysses and the Sirens by Herbert James Draper
1.3 The Mermaid by Howard Pyle
2 Fairy Tale
2.1 The nymph of fairy tale by Hans Christian Andersen

Most famous mermaid paintings and artists

Artists have always been fascinated with the beings of ‘other’ world. Form the beginning of time painters have imagined and portrayed the tales of sweet destructions through colors.

A Mermaid by John William Waterhouse

John William Waterhouse painted this painting in 1900s, inspired by Alfred Lord Tennyson’s poem ‘The Mermaid’ (1830). Waterhouse actually showed this mermaid artwork to the Royal Academy after his election as an Academician. It’s also one of the most popular mermaid oil painting reproductions in the market. Ulysses and the Sirens by Herbert James Draper

One of the most famous paintings is Ulysses and the Sirens by Herbert James Draper, he was considered a Pre-Raphaelite by his unique impressionistic style. Siren records the bewitching creatures of Odyssey, where Odysseus stuffs wax in his crew’s ears to save themselves from the mesmerizing creatures. The Mermaid by Howard Pyle

Nineteenth century artist Howard Pyle drew The Mermaid where the mermaid dressed with beads in her hair embraces a man with red cap on the edge of two worlds, the water and the land. It portrays the immense passion between them, through the splashed turquoise water under a yellow sun. 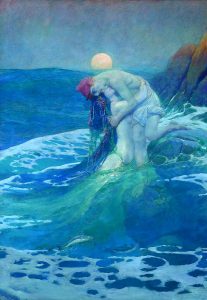 The nymph of fairy tale by Hans Christian Andersen The nymph of fairy tale by Hans Christian Andersen shows the mermaid legend in different light. Here she risks her life to save a shipwrecked prince that she loves. The painting brings out the pain in her body language, the pain of loneliness, she is no more a threat to human kind, but more humane.

Paintings are the art form that paints the fear and beliefs of ancient world. There is a dark world just beside our own, which exists simultaneously with ours, sometimes these marine beasts peak into ours crossing the imaginary edge of understanding.

If you like classic mermaid paintings, get a museum quality oil painting reproduction would be a good choice. Interesting Facts About The Great Wave Off Kanagawa