One of the most popular things to do when you visit Paris is to visit the Louvre Museum. You can see some of the world’s most famous paintings there. You might even see a painting that’s never been exhibited before, or even an unfinished one. No matter which you choose to see, you’ll definitely leave with a lasting impression.

Below is a list of 10 most famous paintings in the Louvre Museum.

The Mona Lisa is one of the most famous works of art in the world. This half-length portrait is considered the archetypal masterpiece of the Italian Renaissance. It has been the subject of books, songs, and movies. The work is also among the most visited, written about, and sung about.

Before the painting was stolen in 1911, many art historians considered it to be one of the greatest works of art. However, the painting was prone to damage due to the temperamental wood used for its panel. The panel was made of poplar wood, which warped over time. Because of this, the oil paint began to crack. In 2005, the Louvre encased the painting in a protective glass case.

The painting’s real identity is uncertain, but many art experts believe that Lisa Gherardini, a Florentine woman, is the subject of the painting. She was married to a wealthy silk merchant and is believed to have commissioned the painting as a gift for her new home. She was also the mother of a son named Andrea. The painting was named La Gioconda, a pun on Lisa’s married name. In French, La Joconde has the same meaning. The Mona Lisa is a masterpiece that has captivated people for generations. 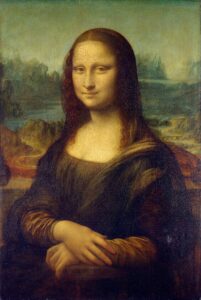 Eugène Delacroix’s painting, Liberty Leading the People, commemorates the July Revolution of 1830. The French people rose up against King Charles X and overthrew him. Today, the painting is an iconic symbol of freedom and democracy. This work is a must-see for any art lover!

The painting shows Liberty leading a group of revolutionaries. Delacroix’s use of color, diagonals, tenebrism, and painterly brushwork capture the passionate mood of the event. Liberty’s appearance in the foreground, as if projecting into space, makes the work stand out as the first overtly political work of modern art. The Raft of the Medusa by Théodore Géricault

The Raft of the Medusa is one of the most famous works of art of all time. The artist produced more than 100 figure sketches, and two are on display in the Louvre. The painting has inspired artists from Delacroix to JMW Turner, and is considered to be one of the greatest works of Romantic art.

Gericault’s style of painting was highly influenced by Romanticism and Neoclassicism, and he incorporates details from his own personal examinations. His linear brushwork and idealized brawny figures result in a powerful visual experience. In addition, the painting’s dramatic lighting and dynamic composition make it an outstanding Romantic masterpiece. The Coronation of Napoleon by Jacques-Louis David

The Coronation of Napoleon is a painting that was completed in 1807. This piece of art is almost ten metres wide by six metres tall.

The painting features a number of important figures in French history. The painting shows Napoleon holding a crown in his hand, which he is about to place on his bride Josephine. Pope Pius VII sits on Napoleon’s right, blessing the coronation under the pressure of Napoleon. The painting also includes Napoleon’s mother, who is dressed in a white dress and sitting in the center of the painting.

The painting’s original version is located in the Louvre’s Denon wing, while a reproduction is housed in the Palace of Versailles’ Coronation Room. Both paintings are official titles. In 1810, David presented it with a Salon decennial prize. The painting remained at David’s estate until 1819. After being exhibited at the Salon for several years, the painting was purchased by American entrepreneurs. Jacques-Louis David painted a replica from memory. The replica was completed in 1822, while the artist was living in exile in Brussels. In 1889, the painting was transferred to the Louvre Museum. Oath of the Horatii by Jacques-Louis David

One of the biggest paintings in the Louvre in Paris is the Oath of the Horatii by renowned French artist Jacques-Louis David. This work was painted in 1784 and has become a classic of the Neoclassical style.

David’s Oath of the Horatii depicts the union of men in the service of a patriotic ideal. The painting was completed five years before the French Revolution, and it reflects the political tensions of the time. A great number of people enjoy this work, which has been a favorite of art historians for many years. The Lacemaker by Johannes Vermeer

The Lacemaker, one of the most popular paintings in The Louvre Museum, is an iconic painting that depicts a girl absorbed in her work. Its evocative subject matter, natural composition, and intense focus on detail emphasize the importance of the lacemaker’s work. The painting’s colors, including yellow, emphasize the intense effort involved in creating the lace, while the flowing red and white threads in the foreground give it a liquid-like quality. Dante And Virgil In Hell by Eugène Delacroix

Dante And Virgil in Hell is one of Eugène Delacroix’s first major works. It signals the move from Neo-Classicism to Romanticism in narrative painting.

This painting is based on the eighth song of hell from Dante’s Divine Comedy. In this passage, Dante and his companion Virgil journey through the muddy circles of hell. At one point, Dante recognizes his personal enemy, and Virgil reassures him that he is in good hands.

Virgil tries to keep Dante from falling into the abyss. He helps him by holding his arm against the wind and helping him balance. Virgil is worried about Dante’s well-being, and his body language conveys the fear he feels for his life.

Eugène Delacroix’s painting of Dante and Virgil in Hell has received a great deal of attention when exhibited in the Salon of 1822. Its emotive nature captured the attention of the audience, and its portrayal of the macabre and supernatural reflected the romantic literary revival in the “Inferno.” Dante Alighieri, an Italian poet, wrote the Divine Comedy in the thirteenth century. The poem was popular for centuries and has inspired many artists to create beautiful works of art. 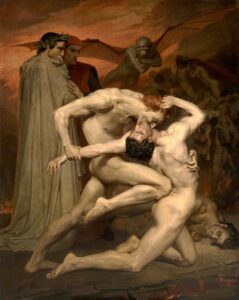 The Virgin Of The Rocks by Leonardo da Vinci

The Virgin Of The Rocks was commissioned by the Confraternity of the Immaculate Conception in Milan to be part of an altarpiece. The painting was created on a wooden panel and placed within a larger sculpted altarpiece. Leonardo used oil paints in this painting, which is unusual for the time. Italian painters had only recently begun using oil paint.

It expresses the Immaculate Conception theme with religious figures seated on a stone floor in a rocky grotto. The work is characterized by a pyramidal composition and is believed to have influenced many of Leonardo’s contemporaries. The Pastoral Concert by Titian

A visit to The Louvre Museum is a great way to learn more about the great artist Titian. He created many paintings that were highly influential and popular in their time. One of his most well-known works is the Pastoral Concert, an oil painting of a group of shepherds performing a pastoral dance.

While originally attributed to Giorgione, this oil painting by Titian is the first example of a new pictorial genre. The muse of lyric poetry and music, Euterpe, is a central figure in the painting. The painting has undergone extensive restoration, and infrared imaging and reflectography have provided new information about the composition of pigments.

The artist envisioned two worlds in this painting, one occupied by the Venetian aristocracy on one side and nymphs and shepherds on the other. Although no one is speaking in this painting, Titian has successfully depicted two sides of a pastoral poem by demonstrating how both worlds are intertwined. Death Of The Virgin by Caravaggio

Death of the Virgin is a painting by Caravaggio. The painting is a perfect example of Caravaggio’s use of light and shade. He played with the light bulbs and dark areas of his paintings to create a powerful effect.

In the Death of the Virgin by Caravaggio, Mary is lying flat on her back in a simple red dress. Her head is lifeless, and her body is bloated and swollen. Her feet are also enlarged. Although the painting was rejected by the fathers of Santa Maria della Scala, it was eventually acquired by Vincenzo Gonzaga, who bought it on the advice of Rubens. It is now in the Louvre. 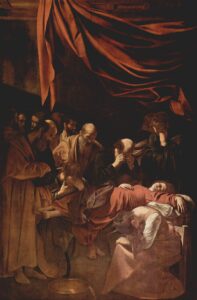