Portraying cowboys and their adventures on the canvas exists since the late 19th Century where artists turned the American version of history into real-life paintings. This art form emerged specifically in the Western United States and soon spread its wings to accommodate painters from all around the world. painters chose to portray the thoughts in their minds through cowboys because of a specific reason, which is that cowboys qualify as the only people who present the essence of the rugged, wild animal life and the organized, logical human nature and what it leads to when these two aspects of nature come in contact with one another. Apart from this, if you notice carefully, they can be compared to a link that harmoniously bridges the traditional and modern, the rustic and the fancy, the time that is long gone and the one that is yet to come. Here are a few examples of the famous cowboy paintings and the stories behind them.

The Fall of the Cowboy

‘The Fall of the Cowboy’ by Fredric Remington came into being in 1895 and was painted to form an illustration for one of the essays by Owen Wister that is known by the name of ‘The Evolution of Cow-Puncher’ published in the very same year. In the painting, you will see a cowboy on his horse looking over his friend who is trying to open the partition on land and his horse parked right beside his friend’s. The story that has been spun behind this painting is based on an invention in 1873 of the machine that manufactured cost-effective and durable barbed wires. Following this, the open range was nowhere to be seen and all the stockmen and farmers in the country created a partition on the land to suffice themselves. In the painting, where the cowboy is seen opening the barbed wire fence symbolizes his obligation and the termination of open ranges and cattle drives. 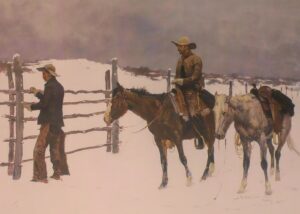 If we are talking about cowboy paintings and their unique stories in this article, then the name of Charlie Russell cannot go unmentioned. His paintings were created in such a way as if the scene depicted seemed alive and you could feel every emotion, passion, and glee glaring in them. Russell’s paintings were his way of telling stories to the world; similarly, ‘Caught In Act’ shows how a group of people of Native America has gathered around a cow to butcher him and their bony pet dogs are pleading. Here, two cowboys have arrived to scene and they have “caught” the natives “in action”. The painter has left the ending of the story to the viewer’s interpretation; they can either think that the cowboys punished the people for their heartless act, or took part in their feast. Ol’ Max Evans’s paintings mainly focused on the working Cowboy’s West because his paintings present a true picture of his times as he worked as a cowboy and soldier for a long period. The story behind ‘In My Valley’ as we have learned from the horse’s mouth concerns the rise of a strange mysterious city on land which was once a Spartan ranchland for the cowboy. The painting is primarily a representation of his vision regarding the future of the ranches. 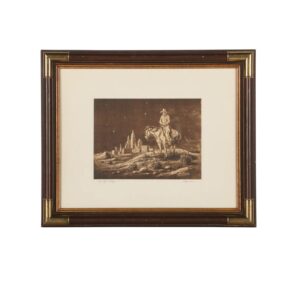