The challenge of painting winter scenes is far more difficult than capturing a summer scene, which is why depictions of winter in western art were scarce until the early Renaissance. Below are some of the most famous winter paintings in the world.

The Magpie by Claude Monet

Monet’s painting, “The Magpie”, is one of the most famous paintings in the Impressionist movement. It is also one of the earliest works by the French impressionists. This masterpiece was acquired by the Musee d’Orsay in Paris 80 years after it was finished. Today, it is the most popular work in the collection. It is part of a series of paintings in the collection, which is now being shown in the Museum’s Colours of Impresionism: Masterpieces of the Musee d’Orsay. The Hunters in the Snow by Pieter Bruegel

In this painting of the hunters in the snow, the artist has achieved the perfect balance between enigmatic and precise. The figures of the hunters and the frozen canals form the main diagonal. Both of these diagonals lead through the foreground and continue into the background. In the background, the lines of frozen canals dominate the scene. While Bruegel may have used the elements of realism to create an image of a world gone by, he tempered the violence with beauty.

Bruegel’s portraits of the poor were a trademark of his work, and his patrons included Cardinal Granvelle, the detested enforcer of Spanish rule in the Netherlands. Despite the harsh conditions, the hunters managed to find beauty in the scene. The sky is a gloomy steel blue, reflected in the ice covering the river below. Bruegel’s composition also emphasizes the tension between the harsh elements and the beauty of nature. Snow at Louveciennes by Alfred Sisley

Alfred Sisley’s lyrical painting “Snow at Louveciennes” is a stunning example of impressionist painting. The serene scene depicts a quiet village in early winter in France. The soft colors and subtle brushstrokes of Sisley’s composition are calming and inviting, allowing the viewer to virtually walk through the scene. The artist also included a single figure in a simple apron, which gives the work a very human quality. The landscape in Winter Landscape by Caspar David Friedrich is a classic example of the romantic movement. The scene depicts a single figure, propped up against a central rock and gazing out over the landscape. Despite the presence of a pair of crutches, the figure is surrounded by a forest of tree stumps. A man kneeling before a crucifix rests on his back, as though in prayer. The artist used a symbol of the crucifix to convey a sense of spiritual union.

Friedrich also admired the Gothic church architecture and compared it to the natural growth of forest trees. He also sympathized with the democratic and patriotic movements of the day. In his paintings, Friedrich used a minimal amount of pigments and focused on creating a graduated tone. The haze, which appears to be translucent, is created with careful stippling, and Friedrich used a transparent blue pigment called smalt. 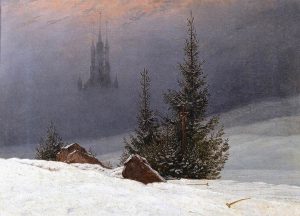 Snow at Argenteuil by Claude Monet

Claude Monet completed a painting called Snow at Argenteuil in 1875. The painting measures approximately 28 by 36 inches and is an oil on canvas work. It is currently in the collection of the National Gallery in London. The artist lived in Argenteuil, a suburb of Paris, from 1871 to 1879. The area was impacted by heavy snow in winter 1874-1875. It was one of Monet’s favorite subjects.

The painter employed several layers of paint to create the image of snowfall on a road. First, he used a light underpainting. Then, he applied grey and blue to the larger areas of the canvas. Secondly, he used smaller strokes of paint to choreograph the colours and bind the painting. Third, the paint on the road surface is thicker than anywhere else in the painting. This technique is known as impasto. Winter Landscape with a Bird Trap

Brueghel’s Winter landscape with a bird trap has become one of the most enduring images in Western art. Only 45 of the more than two dozen known versions of this painting are considered autograph works by the younger Brueghel. The other three are considered workshop copies of various quality. Among these six are the Smith painting, which is signed and dated. The dates range from 1601 to 1626.

The pictorial rendering of the fog in the Smith panel makes it an outstanding work of art. The snow, fog, and silhouettes create an incredible effect. The soaring and perching birds are observed as they pass by the silhouettes. In the foreground of the panel, a large bird trap is visible, surrounded by volatiles. The bird trap, however, remains the most iconic image of winter landscapes. The Census at Bethlehem by Pieter Bruegel the Elder

The Census at Bethlehem by Pieter Bruggel the Elder depicts a street scene in Bethlehem during the time of the birth of Christ. The work depicts life in the Flemish countryside at the time of the census, a time of intense religious activity. While it is not a nativity scene, it does depict the hive-like atmosphere of a busy street.

The original 1566 version of the painting is located in the Royal Museums of Fine Arts in Brussels. A copy of this painting is located in Museum Mayer van den Bergh in Amsterdam. The Younger artist, Pieter Bruegel, made thirteen copies of the work, which differ only in element and colour. The detail is from a preparatory drawing made by Bruegel the Elder.

Several copies of The Census at Bethlehem have been made since the elder Bruegel’s death. One copy sold for $10 million in 2013 and is in the collection of the Royal Museums of Fine Arts of Belgium. The Netherlands was part of the Seventeen Provinces under the reign of Charles V, which included present-day Belgium, Luxembourg, and some territory in France and Germany. The Sea of Ice by Caspar David Friedrich

Friedrich’s painting The Sea of Ice was one of his final oils, and it depicts the passage of time and the journey of a human life. Five ships sail from the shore to the horizon, indicating the passage of time from childhood to old age. The painting is unusual in that it is one of his most personal works, with the sky dominating most of the canvas. Friedrich frequently portrayed female figures in his paintings, and this work is no exception. This painting features a remarkably evocative blue sky and extensive natural structures.

The icy shores and blue skies are reminiscent of the unbending nature of the North Pole, and they reflect the transience of man. Friedrich’s painting evokes spirituality and transcendence by depicting the icy world as a temple of God. The ice and snow landscapes in the sea of ice are a testament to this belief. Friedrich intended to portray nature as an eternal temple. His painting also depicts the frozen North Pole and the sun suspended in mid-sky.