During the nineteenth century, the British artist Joseph Mallord William Turner RA (also known as William Turner) was an important figure in the world of art. He was a painter, printmaker, and one of the most famous watercolor artists, and he is famous for his colourful, expressive landscapes and turbulent, often violent marine paintings.

This painting shows a crew of fishermen attempting to control a small vessel amid rough seas. The moonlight contrasts with the warm glow from the gaslamp inside the boat. The painting is often interpreted as a metaphor for nature’s power. In the background, a rock formation called “The Needles” can be seen. This formation is located on the western shore of the Isle of Wight, near Portsmouth.

The painting is a prime example of Turner’s affinity for the sea. Its sweeping seascapes were influenced by his fascination with the ocean and tides. The tide was the driving force behind his seascapes and he was soon known as the painter of the sublime sea. His seascapes defined the genre of painting and elevated his artistic status. Hannibal and his army are crossing the Alps in an oil painting by JMW Turner. The painting was first exhibited in 1812 and later left to the nation in the Turner Bequest. It is currently held by the Tate Gallery in London.

Turner drew the subject matter of the painting from the Napoleonic Wars, which were raging at the time. The painting was a reaction to Jacques-Louis David’s painting of Napoleon Crossing the Alps, which was first seen in 1802. Turner set his painting in the Italian valley of Val d’Aosta, which is the route that Hannibal might have taken across the Alps.

The Alps were often referred to in the context of battle. Turner gave his pictures long names and accompanied them with poems. The unfinished poem “Vain Hope” accompanied the painting “Army Transition of Hannibal Crossing the Alps.” While the scene itself was based on a battle, Turner also drew attention to the relationship between man and nature. 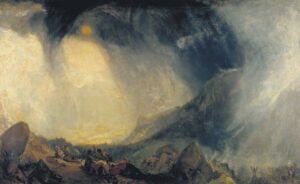 In The Shipwreck, JMW Turner depicts a sea calamity. The waves rage over the broken ship, tilting the vessel toward the center of the canvas. A shipwreck is a devastating experience for a human being, and Turner captures this in his famous painting. He shows the power of the sea, man’s corruptible existence, and human frailty.

Turner submitted The Shipwreck to the Royal Academy in 1805, shortly before he became a full academician. The seaside town of Margate was Turner’s study area, and he returned there many times during his lifetime. Critics and the public loved this painting, although it did not receive the same attention as many of his later works. JMW Turner’s Dido Building in Cartage, also known as “The Rise of the Carthaginian Empire,” is one of his most celebrated works. The luminous classical landscapes of Claude Lorrain strongly influenced Turner in his creation of this monumental work. The painting has often been described as Turner’s chef d’oeuvre.

This painting portrays the legendary founding figure of Carthage, Dido. The painting features Dido, who is dressed in blue and atop her husband’s tomb. The scene is set in the early 9th century B.C., when Carthage was one of the world’s largest cities. It was part of the Carthaginian Empire, which eventually fell to the Romans. Frosty Morning by JMW Turner is a romantic landscape painting by the famous British painter. The subject matter is personal and reflects Turner’s experience of living in Yorkshire. It is an oil painting on canvas that measures 1137 x 1746 mm. The Tate Britain acquired the painting in 1856.

The painting was exhibited at the Royal Academy in 1813 and is one of Turner’s best known works. In it, his eldest daughter Evelina and her horse with an ear seal are seen in a Yorkshire winter scene. The gentleman with a blunderbuss seated next to his daughter might be his father, or his Yorkshire patron, Walter Fawkes. The image may also reflect Turner’s own death, which would be consistent with his visions. 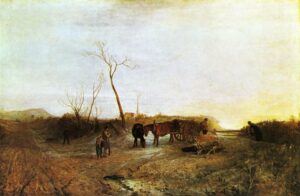 JMW Turner’s Norham Castle Sunrise is an exceptional watercolour painting. It is a richly bucolic and symbolic scene. The painting was so popular that collectors fought to own it. However, the painting’s sale was fraught with controversy. Eventually, it was purchased by Edward Lascelles of Harewood House. Although the painting’s provenance is unclear, some critics attribute it to jealousy.

This painting depicts a scene in which an early morning fog lingers, running away from the light of the sun. Although the fog is fleeting, it is a pleasant scene. It is also peaceful, as nature continues to be untouched by the modern world. Turner created the picture using loose, light brush strokes that create an atmospheric atmosphere. 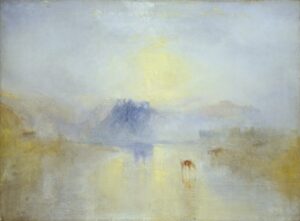 JMW Turner’s The Slave ship is a powerful depiction of a harrowing experience. It features a tumultuous sea and a deep red sunset. In the foreground of the picture are the bodies of the slaves. Turner has painted the ship in a way that conveys the image of death. He also chose to paint the slaves in relative clarity. He shows their pain and desperation. Moreover, he depicts the dead slaves in gruesome detail. The painting generates a strong feeling of anger against the slave owners.

Although The Slave Ship is not a documentary, it depicts one of the most gruesome aspects of the Atlantic Slave Trade. Its title has several connotations, and it was a controversial work during Turner’s lifetime. In the United States, it was recently exhibited, and its meaning has come under scrutiny.

Turner’s The Slave Ship asks viewers to think about the exploitation of slaves. He also wants to raise awareness about the horrors of slavery and abolition. Many famous artists have been inspired by different horrors in the world and have used their art as a political tool.

Peace – Burial at Sea was originally exhibited in 1842. It is a companion piece to his war painting War. The painting depicts a burial at sea in the aftermath of a battle. The painting has a haunting atmosphere that makes it a great choice to look at. This piece is a wonderful example of Turner’s skill.

The painting, which first exhibited at the Royal Academy in 1842, shows the burial of his friend David Wilkie at sea. Its palette is cool with saturated blacks. The painting is a striking contrast to War – Burial at Sea, which depicts Napoleon’s disgraceful death. If you like Turner’s paintings, you can check out Turner oil painting reproductions at Outpost Art.