Jackson Pollock is one of the most influential figures in the abstract expressionist movement. He is best known for his use of the “drip technique,” which entailed pouring liquid household paint onto a horizontal surface. This method allowed Pollock to see his canvases from all angles.

If you’re interested in knowing about some famous Jackson Pollock paintings, this article is for you. This article discusses 10 most famous jackson Pollock paintings. These works are known worldwide, and many are on the list of most expensive paintings in the world. There are also several other pieces you might not be familiar with, so be sure to read on to learn more about them.

Number 5 1948 is a painting that features the artist’s drip and abstract style. It is a brown base splattered with yellow drizzles. The layers of paint give the work volume and can be seen with the naked eye. This painting is currently in a private collection in New York.

While experimenting with the technique, Pollock did not use brushes to create this painting. Instead, he sprayed and poured liquid paint on the canvas. He also did not use easels or standard painting sizes. His process was unpredictable and allowed him to enter direct contact with his work. He painted countless many-colored dots in random patterns onto a brown background using an unusual technique that disregarded conventional painting techniques.

This masterpiece is widely considered one of Pollock’s best pieces. It not only reflects the spirit of the time, but also introduces a new technique that has become highly valued. If you want to learn more about Jackson Pollock Number 5 1948, you can visit the Jackson Pollock website. This website features an extensive collection of art and literature from the 20th century. Number 11 1952 depicts eight dark, vertical stripes in varying angles. The painting introduced a new style of painting. Its creation and controversy paved the way for many other artists to make bold and innovative actions. To understand why the number 11 is so popular, it helps to know a little bit about Pollock’s life.

Jackson Pollock’s One: Number 31 1950 is a large drip painting. It was owned by a private collector until 1968, when it was purchased by the Museum of Modern Art. Since then, it has been on display in the museum’s collection. This work has been an important part of the museum’s collection, and it is well worth a visit to see it. Pollock’s Number 1 1950 is a classic example of the movement. The artist’s method of applying paint is very unique and is considered a masterpiece. His marks are dripped, poured, and flung onto the canvas. The resulting work is an impressively diverse example of his work, incorporating an incredible range of colours, shapes, and forms. Pollock essentially dissolved figurative elements by applying these gestural marks. Convergence is a masterpiece of abstract expressionism. It was a difficult painting to create, and is said to be the world’s most difficult puzzle. It was a radical work of art, and is a symbol of the freedom of speech and expression in our society. Jackson Pollock created the piece on a canvas 93.5 inches wide and 155 inches long. Pollock used a drip technique to create his masterpiece.

For some people, this painting will suggest a negative thought, while for others, it will inspire positive feelings. However, no matter the interpretation, you should remember that Pollock painted the work based on his own thoughts and emotions. Mural 1943 is signed by the artist and is dated 1947. It was probably created in the autumn of 1943 and measures 2.43 by 6.04 metres. The artist used oil paint on linen to create this painting. It is in the private collection of the Tate Modern, London.

It is largely abstract but contains traces of human figures walking, birds, numbers, and letters. It is inspired by the work of Albert Pinkham Ryder and Thomas Hart Benton. This Mural was created in one day, much earlier than usual. Nevertheless, it is a great example of Pollock’s talent and ability to blend different styles.

Autumn Rhythm (Number 30) is one of Jackson Pollock’s most famous works. Painted in 1950, it is in the collections of the Metropolitan Museum of Art in New York. It is a classic example of Pollock’s poured-painting style that he developed between 1947 and 1952.

Autumn Rhythm began with a skeletal framework of black lines and was layered with other colors. The resulting piece was a combination of light and dark colors that suggest opposing sensations. A closer examination of the painting shows how thick the paint is, which lends it a lyrical quality. Although strictly nonfigurative, it is nevertheless evocative of nature’s beauty and rhythm. “The Deep” is an example of Jackson Pollock’s technique, which uses drips of white and black paint with a touch of yellow. The dripping paint is reminiscent of the waves of water in the ocean. The resulting work is an entrancing sight to behold.

“The Deep” was painted during a difficult time for Pollock, who was losing his grip on alcoholism. It shows how he was engaged with the canvas, as drips of paint rise and fall across a chasm. It was one of his final works, and it illustrates the link between mood and art. 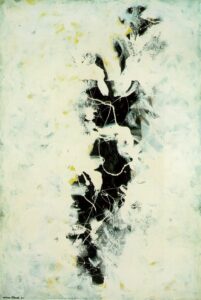