What do deer symbolize?

In Feng-Shui, the symbol of deer is most commonly associated with longevity, but in reality, they are much more than that. A deer is mainly known for its sharp instincts, speed, and capability to identify any forthcoming danger, endurance, and long-life which in turn stands for a healthy life. According to the folklores and legends, there existed three varieties of deer that were of the gray, white and black color that stands a symbol of the grounded and primary requirements of life, and were known to have a lifespan of 1000, 15000 and 2000 years respectively. Here the white deer was especially introduced to symbolize times of peace and prosperity.

Regarding the Feng Shui symbols of wealth, the direct equation of the deer to wealth and prosperity sources from the fact that in Chinese, the word deer sounds like something with similar connotations; thereby, when one combines the dual characteristics of longevity and affluence in the same animal what is received at last is long-lasting opulence. Having one of these deer paintings at your home or office will bring luck and light along with better opportunities for fame and money in the path of your career. Gifting deer paintings to close friends or family or to the bosses in your office stands as a gesture that portrays the immense respect and approbation that you hold in your heart for them. Apart from these extensive areas, coming to its subjective purpose, in Feng Shui, it is believed that looking at or owing a deer painting will help your brain to work swiftly thus enhancing your memory to learn and think quickly. 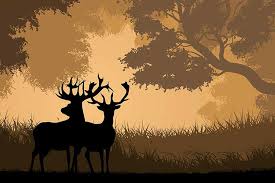 Before choosing a deer painting for your home or office, remember that a deer is sometimes also known for its violent nature and for being moody, which might reverse the luck that would have been otherwise brought into your life. A better choice, in this case, would be to go for the ones that are a bit smaller in size and have been depicted with a calm nature appearance looking onto his surroundings peacefully. Often when deers are painted to serve the purpose of Feng Shui, you will find them in a group of five where they are enjoying each other’s company and bounties of nature around them. Another typical feature of these paintings is their setting; they are located amidst beautiful meadows with streams of water, hills, and flowers encapsulating them. The significance of the number “five” here is derived from the Chinese idea of wealth and luck; this is because, when the word “deer” is written in Mandarin and pronounced loud, it sounds the same as a word which means road. On the other hand, the Chinese gods of wealth are represented to be five in number that is a symbol for the five roads that leads to prosperity, and thus its connection with the five deers. Lastly, remember that the deer paintings should be hanged in the health corners like the “yin nain” of the house, especially when they are depicted alongside with Sohu. Dog paintings are always a lovely collection for home Why I Buy Indian Paintings for Home? Buy a Lovely Cat Painting for Your Child’s Room